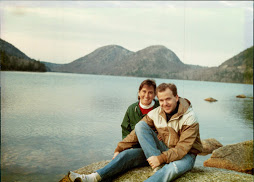 I began my  career as a software programmer at IBM. With a mathematics degree and just enough computer science classes from University of Wisconsin, I was chosen to write support tools for a new Federal Aviation Administration computer system. Thirty years ago, we coded in Ada on a main frame computer and would have to wait so long for a program to compile that I knit sweaters while I waited.

I continued in this world for the next 12 years, soon moving into program management (I am way  too extroverted to be a coder) and supported the release of healthcare software, including one of the first Hospital Electronic Medical Records programs.

Today, meanwhile, I have been considering how our belief systems affect our perception of reality. I witness students whose personal stories determine their success or self sabotage. I ache for young people who believe that they don’t deserve happiness or kindness. I see others, in contrast, who are wired for success. I will not be the first to call our stories “software of the mind,”  but am struck how our internal beliefs take in the data around us and spit back whatever results we seem programmed to expect.

As a program manager and as a coder, I lived in constant fear of severity 1 errors. When you release software for testing or to the public, when a program breaks, the error is given a severity level of 4, 3, 2 or 1. A severity level 4 (“sev 4”) error is a cosmetic fix that is rarely  resolved or maybe you would work on it during  the days when only you  had to work since we were a newbie you had long used up your vacation. Sev 3’s were more important, but didn’t affect overall operations and Sev 2’s had a work around, but were serious enough that you’d need to work a night or weekend to resolve. Sev 1’s took down the system and you weren’t going anywhere until they were fixed, especially if the software was out in the field.

I have applying this same error designation to my internal software and conflicts that affect my system. My brain seems to perceive most challenges as Sev 3 or  4 errors and if I have time to reflect on a lazy day, I might refine my belief systems a bit to incorporate.

Really surprising news I seem to log as Sev 2 errors and respond by heading to a journal, a wise friend or counselor to suss where I now stand.  I have had some Sev 1’s in my own mental software where life shocks have stopped me in my tracks and notice that I use those moments mark the end of an old identity and emergence of a new me.

Some times we as the coders would negotiate severity levels with clients when they identified an error. What seemed cosmetic to us would be considered critical to them. Playing with this analogy, I wonder when and why we incorrectly log the error severity levels within our mind software? Angeles Arrien would caution to pay attention when we might normalize the abnormal or abnormalize the normal. When do I engage in denial or overdramatize? Looking through a conflict resolution lens, where am I missing discord and not appropriately engaging in the change process? Or, where am I getting stuck in a victim stance or overwhelm needlessly?

I return to the Art of War for guidance here. When discord occurs, we are counseled to step onto the battlefield like a Sage Commander and survey where we stand. Objectively assess, who are my opponents? What resources do I have at my disposal? What does this battlefield look like and what might I be missing?  What are my strengths and weaknesses?

Returning to the software analogy, how can I be a sage customer service representative who listens carefully to a problem as it is described and be willing to return to my belief system coding team and calmly explain where we might need to do some updating?

May you find each problem that arises as an opportunity to create the best darn mind software available. You’ve got a large market waiting; we could use your help in processing the data we receive daily from these polemic times.

As I was tracking the World Cup statistics from FIFA.com, I found myself recalling a local soccer match I had watched with my mother a few weeks ago. Based in California, my OD consultant mum was in town for the weekend and accompanied our family to Billings for a state tournament.

We both shook our heads as we witnessed the teenaged girls on the field struggling. A month before we had seen this same team play with success and hold strong against their opponents.  “Well,” I remarked, “we’ve both now got a great leadership case study to share.”

This was a set of strong players who played in the fall on a rarely-defeated high school team. Some are fantastically aggressive defensive players, others can run like the wind, and still others have beautiful ball handling skills. Yet, hearing the coach yelling at the girls from the sidelines, I figured she had not gotten the memo on why managing from your team’s strengths is a winning strategy.

As we caught snippets of the coach’s assessment of what the girls were not doing right, I was reminded of a manager from the beginning of my career with IBM. A favorite story whispered around our department recounted when our manager, we’ll call him Bill, began giving one of our senior software developers, Terry, some actions to complete. As Terry listened and mentally noted the “to do’s,” Bill couldn’t stand it. “Pick up the pen, here’s a piece of paper. Now, write this down,” he stammered.  That Terry was African American and probably 10 years Bill’s senior made this slight even more inappropriate. Bill was the same manager who asked me if I was going to have children because that might affect if I could continue to be “on the fast track.”  Perhaps he missed the interpersonal skills, sharing confidential information and EEO sessions during manager’s training, but we were all quickly looking for ways to escape his leadership.

Tell me long enough I am a bad employee/soccer player/partner and I’ll probably begin to believe you. In contrast, focus on what I am good at and notice how I square my shoulders, show up and perform well.

Strengths-based leadership is the concept of focusing on what team members do well, while giving each the opportunity to improve our skills in other areas. As one high tech sales executive illustrated for me, “A new sales rep will land in my office and say, ‘I can’t write,’ and I have learned to say, ‘Let’s not worry about that now, because I know that you are great on the phone. Focus on selling on the phone, and if you’d like to learn to write better we’ll work on that later.’ By acknowledging everyone’s strengths, I have a top-selling sales team.”

A Gallup survey of more than one million work teams, which also conducted more than 20,000 in-depth interviews with leaders, tracked why participants followed the most important leader in their life. The research uncovered that, ” the most effective leaders are always investing in strengths. In the workplace, when an organization’s leadership fails to focus on individuals’ strengths, the odds of an employee being engaged are a dismal 1 in 11 (9%). But when an organization’s leadership focuses on the strengths of its employees, the odds soar to almost 3 in 4 (73%). When leaders focus on and invest in their employees’ strengths, the odds of each person being engaged goes up eightfold.”

A friend asked me to come into her 5th/6th grade classroom last week to tell a story. When I arrived, one of the 12 year olds looked me right in the eyes and said, “You are the best storyteller.” Another added, “I love when you tell stories.” When my friend hugged me and told the class that I was giving them a wonderful gift by dropping by and that they were so lucky to have me, I thought, “what a contrast to the soccer weekend.” Instead of doubting myself as those teenaged athletes did, I sat up straight and delivered a tale from China as best I’ve ever told it in the past 10 years. I bought their assessment of me, just as we are all prone to do.

My friend Sunny calls it, “the Friday morning weep-fest.” After last week I’d have to agree. Driving downtown, I too had tears rolling down my cheeks listening to National Public Radio’s latest selection from the Storycorps Project.

Storycorps is an oral history project begun in 2003 where tens of thousands of everyday people have interviewed family and friends in a mobile recording booth. Each conversation is recorded on a free CD that the participants take home, and archived for generations to come at the Library of Congress.  Here’s Storycorps founder, Dave Isay, sharing from the project:

Chief Justice John Marshall once said that “to listen well is as powerful a means of communication and influence as to talk well.”  I am impressed with not only the result of these interviews, but also the process. How often do I give my loved ones 40 minutes of uninterrupted, focused story telling time?

So you might wonder, what had me tearing up in the car? 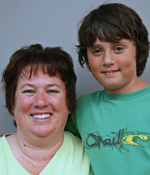 I listened to Debbie Watterson and her son Mitchel talk about having a deaf family member. Click on the link to see caught me.

Play is the exultation of the possible — Martin Buber

I’m guessing by now you’ve noticed that in “playing well at work and beyond”, I recommend embracing the “play” portion of that statement. When we do, life can become a game that rewards practice, detachment (“it’s only a game”) and most of all having fun.

Counting calories on stairs in Lisbon

Always looking for back up on my theories, I was thrilled to find Volkswagen’s website, thefuntheory.com. Here you can submit ideas on how to use fun to change people’s behavior for the better and win up to 2,500 Euro! “Be it for yourself, for the environment, or for something entirely different, the only thing that matters is that it’s change for the better.”

To combat rising obesity rates, Stockholm’s Odenplan subway station’s staircase was retrofitted with stairs resembling giant piano keys, which “play” to encourage travelers to take the stairs rather than ride the escalator:

And, to encourage park visitors to deposit their garbage in a bin, a sound system was installed within one trash receptacle to fascinate passersby:

So, how might you employ fun this week to create positive shifts in your organization, family and within yourself?

I have to pass along a fun new project capturing attention around London. Artist Luke Jerram who lives in Bristol has coordinated the installation of 30 pianos throughout the city emblazoned with the sign, “Play Me I’m Yours.” Jerram previously brought incarnations of this project to Birmingham, England; São Paolo, Brazil; and Sydney, Australia. In a recent New York Times article, Jerram explains, “It’s a blank canvas for everyone’s creativity.” 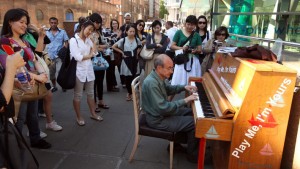 The pianos are secured to the ground with metal cables and have plastic covers in case of rain. Anyone passing by is welcome to sit down and tickle the ivories.  All thirty instruments have faired well, although need constant tuning, provided by a professional tuner on bicycle, due to tons of play.  According to the New York Times, people have tended to relinquish their places courteously after a while to allow others to perform. Here’s a short video clip on the program to get a sense of its appeal: