Last week I had dinner with Job. 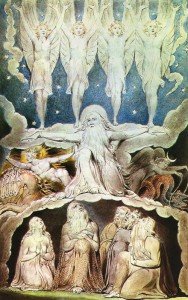 Book of Job by William Blake

Thousands of years after the legend was born, the biblical character Job continues to incarnate in my pedestrian life. On Friday, he visited in the form of a father whose twenty-year-old daughter recently died of a brain tumor. I also met him last month as a young woman about to lose her home. He shows up from time to time as a friend who after being fired cannot find a new job.

To recognize him, let me pass along Job’s story:

Once upon a time, there was a successful father who was a respected member of his community. He had land, possessions, a big family and a wife who loved him.

Then things began to fall apart. In his times, it would have been the gods, or God depending one’s religious background, who ordained the mess. Regardless, Job loses members of his family, his business bankrupts and the good stuff he owned is taken away.

At first, he is tough and takes the setbacks gracefully. “It is the will of God,” he proclaims. But then things go from really bad to worse. He becomes ill and is covered with oozing sores. Then, he’s had enough.

Depending when you meet Job, you migth find him yelling at God or not believing that there is anything remotely divine in the universe. At this point in the story, he hates life and wishes he could die. If we harken back to my post on the four seasons of tough times, Job experiences one of the coldest and cruelest winters of his life.

As I sat at dinner with the deeply suffering parent last weekend it was to Job’s story I went for guidance on what to do. Three friends visit Job at his lowest point. They model both how to support another well and how to really screw it up!

First, the three friends sit in silence with Job for a week. This has been carried forward in the Jewish ritual of sitting shiva where a grieving family stays at home for 7 days and friends come to support them. During these times, we are to witness the other’s suffering and not try to fix it. The three friends shine here as they love Job enough to allow his pain to pierce their hearts and feel compassion.

But, next the friends fail. I try to remember them as a cautionary tale. It appears they couldn’t take the depth of Job hating God and turning away from life. It was just too scary for the three. So, they try to figure out why all this bad stuff had happened to Job. One friend tells Job he must have sinned and God was punishing him. Another adds that he must be a bad person. As you can imagine, this does not make Job feel better. Trying to figure out why a friend is suffering is generally a bad idea. For example, if I had followed these misguided souls, I might have mistakenly stammered, “Perhaps your daughter was only supposed to be here for twenty years,” or “Now she is in a better place.”

The story of Job reminds me that we don’t get to understand the full “why” of a situation and, as Buddha agreed, that life contains suffering. It is very uncomfortable to sit with someone who is miserable. I always wish I could help. I would love to relieve the pain not only in the one suffering but also my own sympathetic sadness. Yet it doesn’t work like that.

I can remind another that I care about him and I would miss him if he wasn’t around. I can say I’m sorry that he is going through terrible times. In the depths of another’s misery, that’s all I know to be absolutely true.

One thought on “Dinner with Job”