When researching Thriving Through Tough Times, I learned that to fully recover from difficult circumstances we are counseled to give. Giving creates meaning out of rough situations, moves us out of ourselves and generally makes us feel better. Andy Mackie’s example as you’ll watch below, adds a whole new level of promise to the “give back to come back” maxim.

After nine heart operations and drugs that sickened him, Mackie decided to use the money he had been spending on prescriptions to buy harmonicas for school age children. With little time to live, according to the physicians, Mackie wanted to finish well by doing what he loved. But, Mackie didn’t finish his time on earth as quickly as predicted, and month after month he bought more harmonicas and taught kids how to play. Eleven years and some 16000 harmonicas later, Andy Mackie left behind a strong musical and ethical legacy when he passed away at 73.

I hope you enjoy this video.

As a continuing theme of this blog, I want to share the work of two artists who bring both beauty from and insight about our oceans’ treasures. Richard and Judy Lang have collected plastic debris since 1999 from 1000 yards of Kehoe Beach in Point Reyes National Seashore and create museum-worthy art.

In one year they easily gather 4000 pounds of plastic. Meanwhile, as Judith says, “We are not cleaning the beach, we are curating the beach,” as they select only plastic in the colors and shapes for which they are searching. What could be a depressing or overwhelming issue to face, the Langs appear to address it with interest and careful observation.  “The opposite of beauty is really not ugliness,” says Richard, “The opposite of beauty is indifference. We are trying not to be indifferent about this and about the world.”

Please enjoy another example of artists as leaders:

Where you see flowers, a rabbit sees lunch. Where most of us would have noticed pesky burrs stuck to our clothing, in 1948 George de Mestral on a walk with his dog visualized Velcro.

Our perspective shapes our experience. Brazilian Jarbas Agnelli reading the newspaper one day, regarded a color photograph of black birds sitting on electric wires. The picture was not simply seen as an idyllic scene, since to that artist’s eye, the birds’ placement reminded him of musical notation. “I knew it wasn’t the most original idea in the universe,” Agnelli writes on his website. “I was just curious to hear what melody the birds were creating.

So, Agnelli translated from “bird” to “note” and here we see the fascinating result.

During a mediation session, each party brings a lens through which he or she views a common situation. Where you might believe you sold me a car in good faith, I might interpret your actions as less than honorable. We each take a subset of the available data and try to make sense of where we stand. To calm down the parties when their interpretations of reality are markedly different, I like to say that we are each looking at a situation from different “windows.”

I had a personal experience of multiple windows while watching the movie “Avatar.” The theatre was packed as seemed appropriate given the positive reviews the movie had consistently received. Set on the imaginary planet of Pandora, the story describes a conflict between Earthings who have come to mine resources and the tall blue Pandorians who seek to protect their world and way of life. As one reviewer wrote, “if you’ve seen ‘Dances of Wolves’ you know the plot.”

Every good movie has a conflict to be resolved. Even if someone isn’t screaming at another, all compelling pictures present a sticky challenge/conflict that the protagonists must overcome. For example, will the hero win the girl? Can our star overcome poverty and solve her problems? or Can they save the world?

After studying conflict for the past 16 years, I can’t help but notice what approaches the protagonists use to resolve the concocted struggle. “Invictus” for example, was delicious as I witnessed Morgan Freeman as Nelson Mandela creatively employ the Rugby World Cup to rebuild a nation. As you can imagine, life was good while watching “Invictus” from my window! 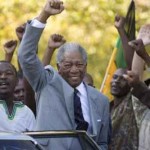 After working this fall with university students from Pakistan’s FATA region, I have been actively wrestling with why must humans continue to use violence, and war as a knee jerk reaction. I care about these young Pakistanis. Knowing that they are each living now in a war zone, makes my contemplation of this question more than academic.

Mandela reminds me that we can transcend the old strategies of revenge and destruction. Out of love for these students, and others who I have taught from Iraq, Palestine, Israel, Lebanon, Libya and other past and current conflict zones, I want to hope that we can follow Mandela’s, Gandhi’s, Martin Luther King’s and HH Dalai Lama’s lead and shift as a species.

So, when the protagonists and antagonists responded in “Avatar” with violence,  I was disheartened. How I wanted a creative resolution! How I wanted the old “they have harmed us enough that we must kill” paradigm to be proven obsolete…especially by the seemingly enlightened and sexy seven-feet-tall blue beings! But no luck. After I had my fill of machine guns, arrows and death, I was probably the only person in America to walk out in the middle of “Avatar.” I knew the rest of the story without reading any spoilers; it’s just too common of a human tale.

If I had pulled out the movie technology lens like many of the reviewers, I would have been delighted by the film. If I had thrown on the glasses of a mythology student, I might have enjoyed how the hero’s spiritual journey was portrayed. But, that day, realizing how many innocent people are at risk due to the often unchallenged belief that revenge and killing can be justified, I couldn’t bear to watch it played out as entertainment. I thought of my international students, and instead needed to recover my composure in the lobby.

Everything depends on our windows.  George de Mestral saw velcro.  Jarbas Agnelli saw music.  Nelson Mandela saw the possibility of his country. In each of them, I thankfully see hope for our future.

And, by my departure from the theatre I also see that I am not done learning the subtle balance between caring deeply and objectivity. Rome wasn’t built in a day, nor was slavery abolished.  I want to hold a vision for productive strategies for resolving conflict without becoming as discouraged about the human condition as I was sitting outside the theatre that evening.  We can change — we are changing — that’s the view I want to see from this window.

This week I passed a coffee shop table where a friend sat with a pretty red-haired woman. Being introduced for the first time, I blurted out how beautiful she looked in an emerald green sweater set. I think I caught my new acquaintance a bit off guard and upon heading out again I thought, “There I go again…”

My husband shook his head a few months ago as we boarded a plane and I shared with the young, handsome airline staffer that he had great eyes. My daughter cringes when I can’t help myself and tell her friends how I love their outfits. I try to temper this behavior — the poor airline employee blushed apple red just to remind me that this is not common practice — but I still hold a deep belief in acknowledgement.

I believe in acknowledgement and its sister action of encouragement because 1) It’s a conflict resolution skill of the first order and 2) It’s the reason that I have chosen to bravely embark on many favorite accomplishments.

When I am passionate about an issue like good education for all, there is nothing more delicious than another seeing my passion and affirming fully that he’s heard me. “You really care about this. It is what feeds your soul. Here’s what I understand you are saying…” Hearing any of those are balm to the soul. If others are enthusiastically making a point, just let them know that you have heard the content, emotion and impact of their words; this works wonders in conflict. You don’t need to agree; just be clear that you have truly heard them.

Before I left on an year long exchange to Mexico after high school, I was required to go to a Rotary training session over a weekend at a camp outside of Minneapolis. One of the session leaders suddenly required us to give an impromptu speech to about 10 gathered students and adults crowded in a small cabin. 30 years later (can it be that long?) I still remember one of the Rotarians coming up to me and out of the blue saying, “You are really good at public speaking, do you know that?”  I didn’t.

Now, whenever I get up in front of hundreds, or embarrass young airline employees that kind soul is more than partially to blame. His words encouraged me. They mattered, whether were true or just one man’s opinion. 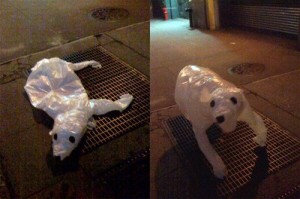 The art of Joshua Allen Harris

Check out this fun piece on artist Joshua Allen Harris, who after a bit of encouragement, has taken to creating fantastic pieces using garbage bags and subway exhaust.

Where has encouragement empowered you? How might you acknowledge another’s contributions this week?