Last week Lillian Brummet for interviewed me for her Conscious Discussions radio show.  The topic of our conversation was Overcoming Conflict and Challenges, and I thus got the opportunity to talk about all my books including Thriving Through Tough Times: Eight Cross-Cultural Strategies to Navigate Life’s Ordeals.

Lillian was a knowledgeable interviewer and has a trick of calling for more authenticity from her guests; she began with a seemingly simple question, “Deidre, who are you?”

Paraphrasing Lillian, she asked, “When you meet the eyes of that lady in the mirror – who is “Deidre” really? Share information about who you are as a person – outside of what you do or the job or the training you have …” 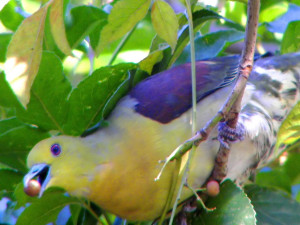 Challenging questions send my brain searching for analogies. With this query I landed on one found in the Hindu Upanishads. Each person can be compared to two golden birds sitting on a single branch. One bird eats the fruits from the tree or engages in life. The other, what some would call the Self, just watches.

So who is Deidre? Which bird?

I could tell Lillian pretty easily about the hungry bird and shared some of “my” preferences, personality quirks and passions. The hungry bird gets bouncy around new ideas, loves to ski, speak Spanish and backpack and also has a habit of saying “yes” a bit too often.

But what of the other bird?  I was flummoxed on how to introduce her. I can forget the watching bird exists, but she is as critical as the Deidre that shows up in the world.

From a leadership perspective, our watching birds provide us the wider view.  They are the ones who notice that “we” are angry, depressed, or making a mistake. Leadership guru Ronald Heifetz describes the watching birds as the critical ability to get on the balcony and observe while our hungry birds are dancing around the floor.

Spiritual traditions have long advised that we connect often to our watching birds. Both the ancient traditions and modern leadership theory suggest that we should cultivate this relationship daily. If we can stop to clear away thoughts and just watch quietly, we can foster a better understanding of this witness self.  I don’t think I can explain who she is; sorry Lillian! However, sitting quietly reminds me to listen to my watching bird’s observations and strengthens my ability to step back from stressful situations, notice what is occurring and pause before I respond.

And, so I pose to you Lillian’s simple question, “Who are you?”

A mere thirty years ago, I spent a semester at El Tecnológico de Monterrey as an exchange student. I lived in the dorm with a wonderful roommate from Chihuahua, watched telenovelas (Mexican soap operas) and even was a college athlete. “El Tec” was probably one of the few locations in North America where the coach wouldn’t double over in giggles while clocking my splits. They needed another female willing to run the 3K event back then so I fit the bill! 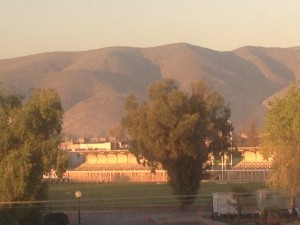 This past weekend, I reran this memory lane while getting to teach dialogue to Tec students in the town of Torreón during their annual leadership conference. I was transported back as I overheard students talking of movies and majors and hearing cheers as students represented proudly their respective states. I basked in typically fabulous Mexican hospitality and was young again.

But all was not the same. My husband will not be pleased to know that as I jogged around campus for old times sake while black-clad police men with machine guns watched me and fellow runners from a nearby hospital rooftop. We learned that a gang-related altercation had criminals in recovering in that building and a dozen police, some in face masks, were stationed there on high alert. And Monterrey of the state Nuevo Leon, a once sleepy town where I safely ran in its surrounding hills with my fellow track mates, is now nicknamed “Monterror de Nuevo Miedo (Fear).”

While waiting for buses loaded with 130+ students in the vineyard-rich town of Parras, I stared out a car window at a lush grove surrounded by a concrete wall. Suddenly a single thirty-foot tall tree you see on the corner in the photo below began to quickly shake making the leaves blur. Is there a wind storm? No, it was completely calm and just one tree moved. Earthquake? That didn’t make sense, and I felt that disorienting feeling that came on most clearly when I watched the smoke coming out of the World Trade Tower after the first plane had entered. I couldn’t find a contextual framework. “Can not process…can not process,” my brain stuttered watching that tree. 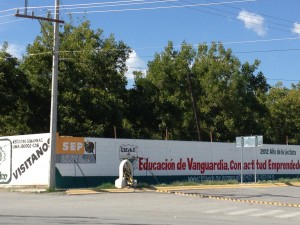 A fellow passenger came to my aid – “That’s a nut tree. To harvest nuts, they have attached a band around the tree’s base, attach a motor that shakes the fruit free.”

The tree incident became a metaphor through the weekend. As we dialogued informally and with the students in groups, we all seemed to be wrestling with how the country could have been shaken so quickly and thoroughly. I heard stories of friends who now dive under tables in restaurants when hearing loud noises. 19 and 20 year olds lamented how children now can’t play outside as they had. This is not the Mexico of my young adulthood, or even the one I last visited five years ago.

Like my fellow car mate who gave me a nut harvest tutorial, leaders often appear to reorient us. They can provide a great service as they provide a greater context. However, these are vulnerable times when we are hungry for answers and thus willing to abdicate personal agency – e.g. post WWI Germany and Hitler’s success.

The leadership’s responsibility is at its heaviest when called to reorient others, whatever the circumstances. We must consider in these circumstances, how can I be careful with my communications when in care of another’s reality? Are the statistics I am using are truly facts? Is my answer empowering or enslaving another? 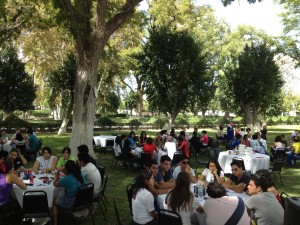 At the end of the conference, we listened to a well-known Mexican political analyst Dr. Denise Dresser. I hear “call to action” speeches often as a professor and consultant, and hers was one of the best I have witnessed.

As she “called things by their true names,” she described a country controlled by monopolies and oligopolies. She provided data on the lack of consumer choice in basic areas of phone, energy, food and media. The facts were bleak and at times overwhelming.

After her compelling painting of Mexico’s present, Dr. Dresser had a choice. Once described, Dresser had the opportunity to call forth more fear and hopelessness and for us to follow her advice. But instead, she took a positive assets-based approach and used three leadership techniques. (You can read an article similar to the given presentation here)

1) Share what is working – Dresser reminded her audience of the enduring Mexican culture is with a litany of its unique gifts. This is a country of riches that are not just found in natural resources. She had me at “los libros de Elena Poniatowska” and “mangos con chile,” and, teary with nostalgia by “visiting any town’s central plaza on a Sunday afternoon.” Mexico snuggled into a corner of my heart when I was a teenager and has never left.

2) Articulate an empowering vision – In a call to action, Dresser developed a future of possibility. She spoke of Mexico containing options for both a consumer and the voter. Dresser then shared how the government is paid for by the people and each can call for transparency and accountability.

3) Believe in the Whole — When asked why she didn’t run for office, Dr. Dresser, who preferred to be called Denise, responded she wanted to stand at the side of the people. She didn’t want to leave that position, and encouraged us to look for creative solutions to resolve these issues. She believes in the whole. The organizers of the Tec leadership conference mirrored this belief as they trained the students in dialogue. They then encouraged the  participants to create circles of interested students across the country to consider deeply the tough issues confronting not only Mexico but also the world.

I left Mexico heartened by those I met and the dialogue I witnessed. These are tough times, but after meeting the students and staff, these are also outstanding individuals empowered to look for solutions. It was a call for me to keep asking: How are my words stopping fear’s motor and reminding others of their healthy roots? How can I keep aligning with the best and the greater whole to bring innovative solutions into form? And to keep cheering…Go Tec!

My new book,Thriving Through Tough Times: Eight Cross-Cultural Strategies to Navigate Life’s Ordeals, is now available for purchase through amazon.com and other standard book sellers! For more information, click here for the press release. I hope the book is a helpful resource when life dishes out unwelcome surprises. Thank you for your support of this project.

This morning I was reading William Rosenweig’s Oslo Business for Peace acceptance speech and was captivated by his analogy of a leader being a gardener. 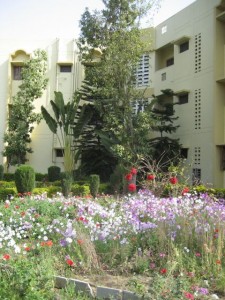 Rosenzweig said, “A gardener sees the world as a system of interdependent parts – where healthy, sustaining relationships are essential to the vitality of the whole. [Quoting author Karel Capek,]”A real gardener is not a person who cultivates flowers, but a person who cultivates the soil.” In business this has translated for me into the importance of developing agreements and partnerships where vision and values, purpose and intent are explicitly articulated, considered and aligned among all stakeholders of an enterprise – customers, employees, suppliers, shareholders, and the broader community and natural environment.”

Rosenzweig provides us a helpful focusing tool for leadership. Instead of orienting our actions on the plants or the eventual fruit, we are better served paying primary attention to nurturing the ecosystem.

Rosenzweig calls us to ask:

I recommend reading all of Rosenzweig’s speech, yet here’s some successful gardener attributes he highlights:

How might we use the spring season to pull the weeds, lay the compost and plant new seeds not only outside, but within our organizations, communities and ourselves?